What is a Power Factor?
When a power supply draws current from the wall (grid), it’s not always doing so in the most efficient manner. Power supplies that don’t have any kind of PFC or Power Factor Correction are likely to draw current in short bursts due to the nature of the energy coming from the wall. This creates “harmonic frequencies” that are unhealthy for many electronic devices and can in many case damage devices being used. In most cases, the usability of the power being drawn by a given power supply could be described by its “power factor”. A power supply’s power factor is the ratio of real power (power being consumed) to apparent power (potentially usable power).

Why do I need PFC?
Essentially, a power supply with a low power factor closer to 0 will not produce much usable energy for the device it is powering. A power supply with a high power factor closer to 1 will produce a decent amount of usable energy for the device being powered. Both of these power supplies could be drawing the same amount of current from the wall however; the one with a power factor further from zero would be the one that you would want powering rackmount chassis server or device. PFC increases a power supply’s average power factor by reducing the harmonic frequencies mentioned earlier. A power supply can have a power factor of -1 as well in cases where the electricity is being returned to the source. For instance, when the power produced by solar panels is not being fully utilized by the devices they are powering, the surplus is returned to the supply. 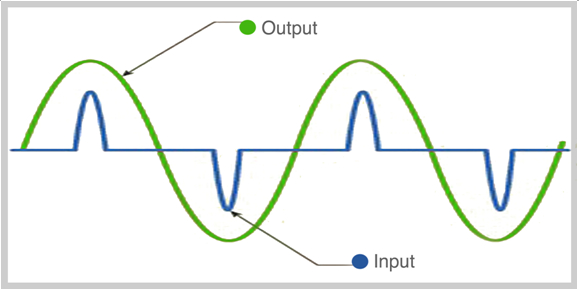 What’s the difference between active and passive PFC?
When it comes to Active PFC vs Passive PFC, there aren’t a whole lot of differences other than the way that PFC is performed. Both types of PFC aim to fix the same problem. Passive PFC is merely a more basic system. With passive PFC, there are set parameters that assume where problem frequencies are going to occur. While these set parameters are not always 100% spot on and fluctuations are bound to occur, passive PFC can still get the job done. With active PFC however, you have a circuit that is capable of detecting unwanted fluctuations and spikes in the current as they occur and correcting them in an adaptive way. This ensures a much cleaner current overall, that is much more viable for sensitive circuitry.

So should I only buy PSUs with Active PFC?
You shouldn’t necessarily rule out passive PFC as a solution. Individual users don’t typically experience serious differences between the two because, on a smaller scale, those differences are more insignificant. If you are running large industrial equipment that requires thousands upon thousands of watts from redundant power supplies however, you will notice more significant differences between active and passive PFC and that should be taken into consideration.

How smartphones can help to stop the Coronavirus?
June 19, 2020

What is Blockchain Technology?
March 5, 2020