The Fastest Desktop Storage with Maximum Performance Ever

Following the long-term popular product line of Netstor external PCI-E to SAS/SATA storage solution, now the whole new third generation has freshly been released to the market. As compared with the modern SFF-8644 port that presents the four 12Gbps channels,

the latest external PCI-E 3.0 ×8 interface of the storage is 33% more bandwidth than the present-day 12Gbps mini-SAS HD port.

The design allow the unit to be kept at the highest, full performance and achievements of up to 6400 MB per second.

Up to 16 Bays Large Storage Capacity

As each tray attached with a 16 TB HDD, total usable storage can reach up to 256 TB raw capacity in favor of any demanding work and application.

Based on the application and requirement, users can choose their own desired brand and model of RAID card or SAS Host Bus Adapter (HBA).

The design is deal for the expansion to the external Netstor desktop high-capacity PCIe 3.0 storage.

The way of next-level and blazing-fast data transmission rate in favor of the varied demanding workflows in all fields.

Capacity, Ultra Performance, and High Security Made for 8K Colorists

NS780S-G3 is the first ever best storage created for the digital content creation, video editing, color-grading, post production and playback.

With two NS780S-G3 storage units HDDs connected to a Mac Pro 2019, it can achieve up to 5000 MB/s throughput to the host in support of the 8K video production performance for the pro colorists, video editors, and specialists.

Which slot of Mac Pro 2019 is recommended to be installed with Host adapter card of NS780S-G3?

We recommend slot 6 or slot 7 as shown in the following: 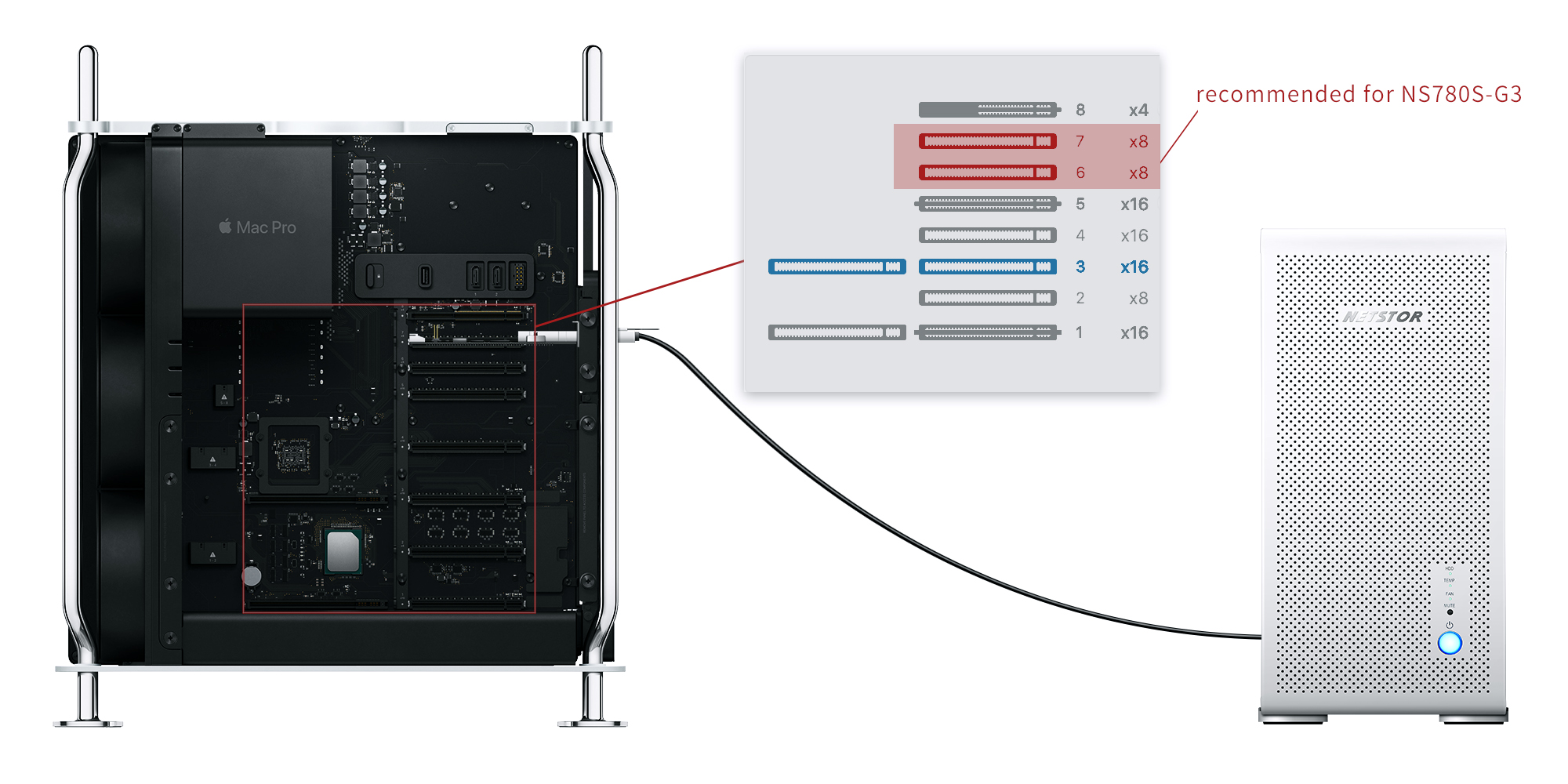 Regarding the NS 780 G3, what is the setup for achieving 6400 MB/sec please. Is a PCIe 3.0 raid controller card need to set it up as a RAID, along with Hard drives or SSD’s?

Is there a model like the NS780G3 but with lower capacity, fewer drive bays? Can partial bays used on NS780G3 to have the system work?

Yes, although the NS780S-G3 storage is designed to have 16 bays, users can decide on their own how many HDDs they wish to install in the NS780S-G3 for use and work.

For example, you can just install 10 hard disk drives in the NS780S-G3 storage enclosure and set the 10 hard drives in Netstor unit as a RAID 5 or a RAID 6 volume to work with the host computer.

What RAID controller card can be used in NS780S-G3 to create a Raid 6 or 5 volume?

Because drive compatibility is directly determined by the RAID card itself, not the enclosure.

For getting the drive compatibility list for ARC-1883ix-16 RAID card, please visit: