Netstor NA622TB3 storage is created to support up to four M.2 PCIe NVMe SSDs. With the present-day largest single M.2 NVMe SSD of 2TB in the market, the maximum storage reaches up to 8TB capacity totally by way of four M.2 NVMe SSDs installed inside.

The Thunderbolt™ 3 NA622TB3 has been considerately designed to be integrated with a high performance PCIe Gen3 switch, permitting each M.2 SSD slot within the NVMe storage to get the best achievement the professional wants.

Each M.2 SSD socket within the Netstor unit is guaranteed to have PCIe 3.0 x2 bandwidth of up to 1600 MB/s, which is precisely the doubled performance ensuring that each individual M.2 SSD capacity volume and each RAID group of dual M.2 SSDs can get the best and optimum throughput and accomplishment.

The Netstor team has thoughtfully designed the enclosure front individual M.2 SSD LED indicators for each M.2 NVMe SSD installed inside the NA622TB3, so the users can easily and conveniently understand the status of each M.2 NVMe SSD within the Netstor unit at any time.

Thunderbolt 3 High-Bandwidth up to 40 Gbps

All the modern Mac and Windows PC laptops/all-in-one have equipped with the up-to-date lightning-fast Thunderbolt™ 3 (40Gbps) interface, and accordingly the Netstor Thunderbolt 3 four-slot M.2 NVMe SSD storage is specifically suited to all the present-day Mac/Windows PC laptop host computers in support of the professional editing workflows.

The NA622TB3 features the abundant and reliable built-in 120W power supply unit. Even if the prospective, high power required four M.2 PCIe NVMe 22110 or 2280 SSDs are installed within the Netstor unit for working, all the solid-state drives are ensured to have the most stable, sufficient power for production.

The NA622TB3 storage features the three-level variable-speed fan cooling system. In addition to the superior airflow dissipation framework of the Netstor unit, users can also select the most suitable fan speed according to the production settings in favor of the varied working environments.

All other product names mentioned in the content are trademarks or registered trademarks of their respective companies in the U.S. and other countries.

Why does NA622TB3 need to built-in PCIe Switch? What’s the benefit?

For example:
new macOS Mojave can only use single disk/SSD as a boot drive, so when you use one of the single NVMe SSDs as bootable drive from macOS, you can get doubled speed from Netstor’s solution.

How to read the temperature of NVMe inside of NA611TB3/NA622TB3 for Mac OS? 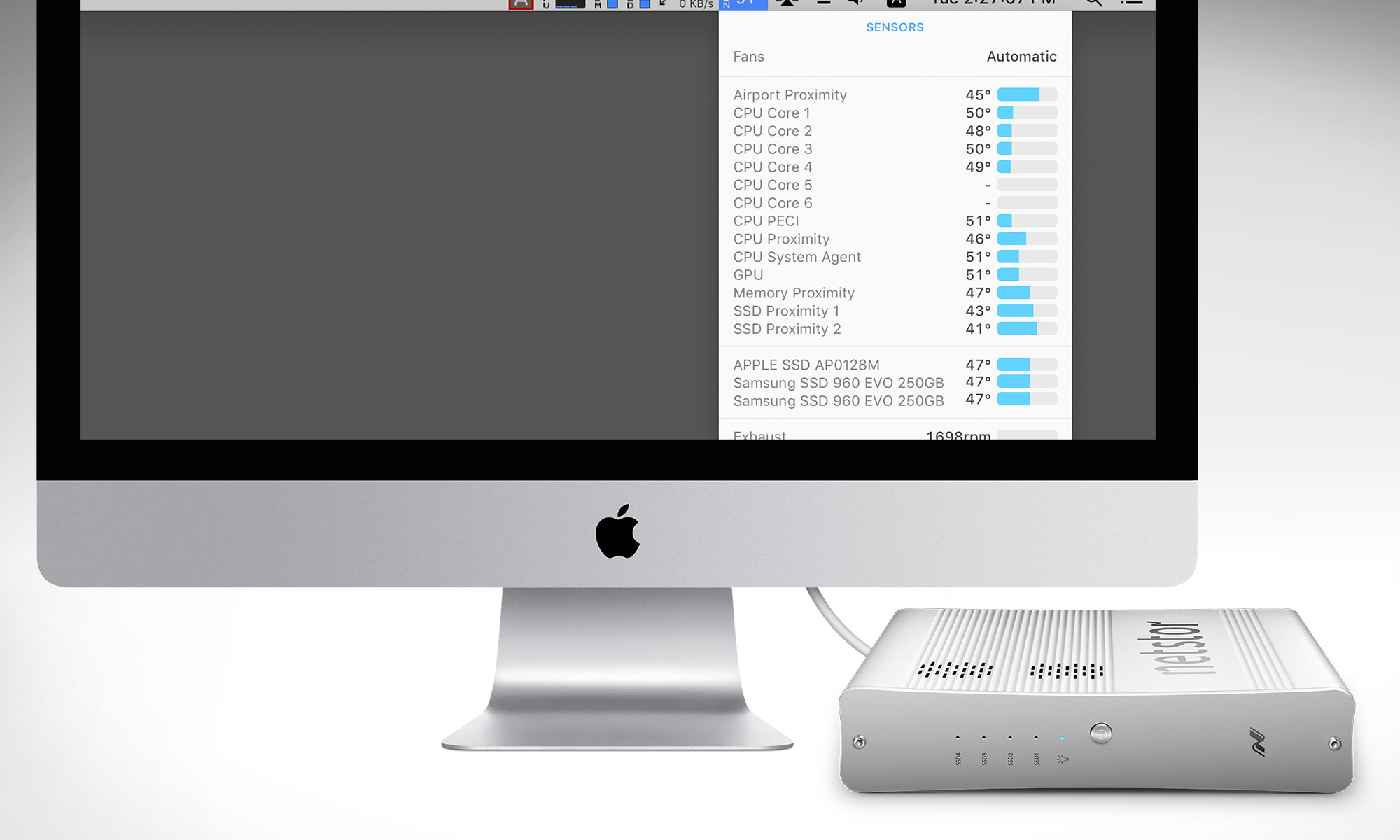 There will be two factors which affect the different performances:
First, spec of M.2 NVMe within computer and spec of Thunderbolt™ 3.
Second, different M.2 NVMe SSDs’ specs.

Although, for the external Thunderbolt 3 interface, the throughput is 40 Gbps, the bandwidth still includes video signal transmission, so in fact, for the data transmission part, the actual performance is only up to 2750 MB/s. 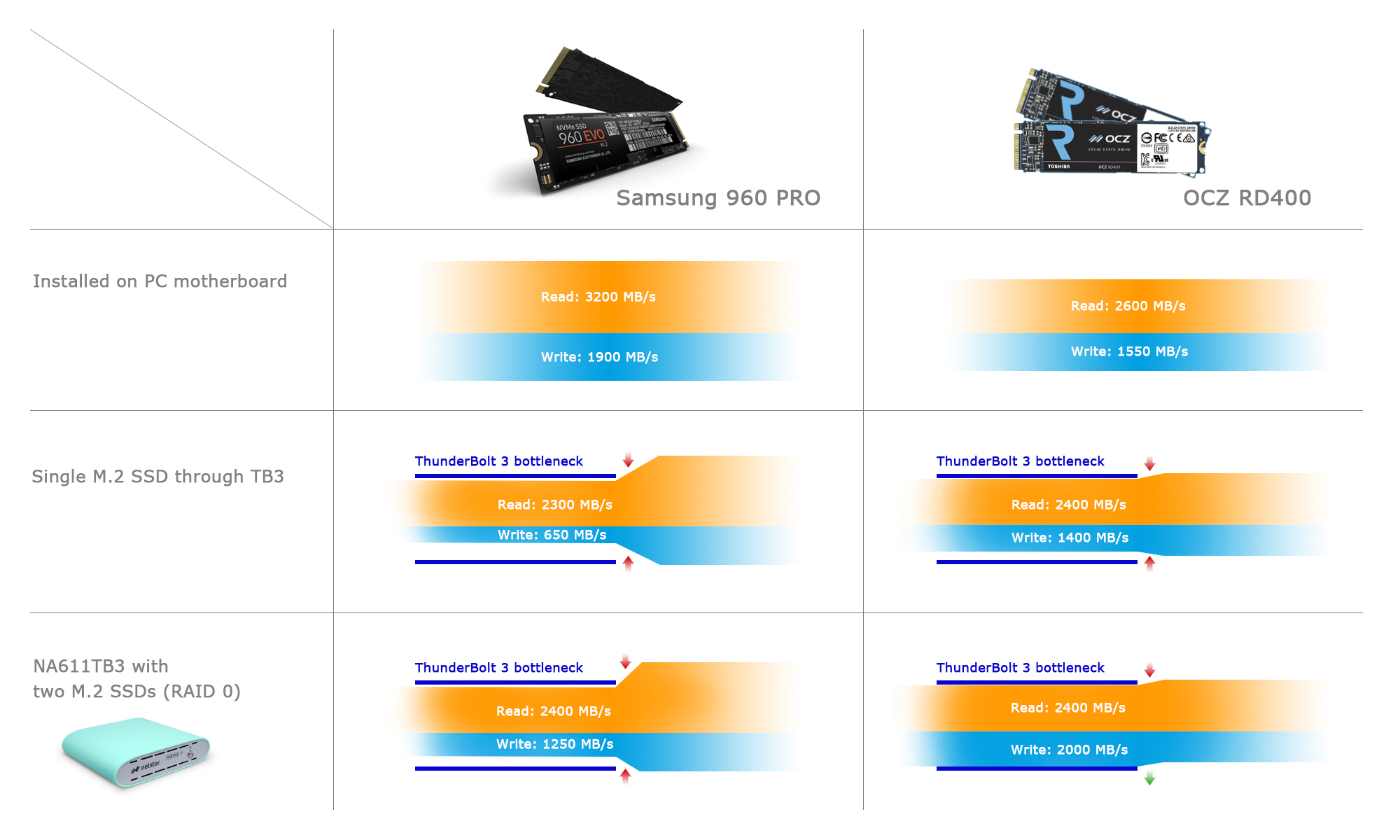 How to Make Thunderbolt 3 Storages in Double Performance?

Here is the way to verify which Thunderbolt 3 Mac computer/laptop contains two separate TB3 controllers in support of the above doubled performance.

We can’t guarantee the M.2 SSD in Thunderbolt 3 enclosure can work with macOS if the M.2 SSD is not listed in NA622TB3’s compatibility list chart.

All we know so far is:

The issue is not solved yet.

Does either Thunderbolt port on NA622TB3 can be used to connect to PC /Mac?

Why are NA622TB3 come with 2 ports and what connection that Netstor suggests?

Does NA622TB3’s power supply need to be plugged in to operate?

Yes, the NA622TB3’s power supply needs to be plugged in for power source to operate because there is a built-in 120W PSU inside the NA622TB3 enclosure.

The principle is we can’t guarantee the M.2 SSD in Thunderbolt 3 enclosure can work with macOS if the M.2 SSD is not listed in NA622TB3’s compatibility list chart.

All we know so far is: